The Lemon Drop cocktail is actually quite new when you compare it to the age of some of the classics. Its invention is attributed to Henry Africa’s in San Francisco which was established in 1970 by proprietor Norman Hobday. His vision for what came to be know as the “fern bar” included comfortable old furniture, antique lamps and giant fern plants, giving it the feel of a living room. The bar was an upscale hot spot for nicely-dressed men and women during the sexual revolution of the 1970’s and later, a popular “meet market” for 1980’s preppies.

Despite its relatively recent conception, the Lemon Drop today finds its way onto many bar menus both as a cocktail and as a shot. We offer a refreshing twist on the recipe that includes a touch of lavender. This floral component pairs nicely with lemon, and if you can avoid the overpowering perfume effect that is so common with candles and air fresheners, this cocktail may win you over. However, it does require some simple preparation beforehand in order to pull it off. After a couple of tries to get this right, here’s our recipe:

Combine all ingredients in a shaker, add plenty of ice and shake thoroughly. Strain into a lavender sugar rimmed cocktail glass and serve.

Probably the first thing you notice about this recipe is that it includes an unusual ingredient: lavender syrup. This isn’t really something you can buy. You have to make it. Thankfully, it’s not that hard, and we have included the recipe below. Beyond that, it’s a basic Lemon Drop Cocktail that uses the lavender syrup as the sweetener. There are other versions of the Lemon Drop that include triple sec and other additions, but none are as easy as this one. 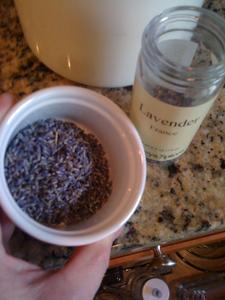 Options for the lavender
There are a few ways that we could think of to introduce lavender into a cocktail. The first is to use a flavored syrup which we will get to in a moment. The second is to take the easier route and actually toss some dried lavender into the mixing glass and muddle with a little sugar or simple syrup as you make your drink. This works, but the flavor is not as intense unless you leave the little bits in the cocktail or you sprinkle more as a garnish. We never liked this option because the lavender ends up getting caught in your teeth and few of us like to chew cocktails if we don’t have to. You could also infuse the vodka which is easy enough, but the flavor and color may not last. Finally, one could make some form of lavender bitters—a super-concentrate of lavender that you could add to the cocktail a drop or dash at a time. We’d love to explore that option at some point, possibly messing around with essence of lavender or some kind of extract, but since making the syrup is easier, we opted to do that instead. 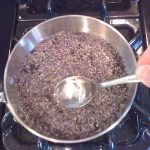 Making Lavender Syrup
First, you need to get your hands on some lavender. If you have a garden with this stuff planted already, you have options, since fresh may be better. We had to use a jar of dried we picked up at Penzey’s Spices on Grand Avenue here in St. Paul, but you can probably find it online, at your local coop or anywhere that sells bulk herbs and spices. Once you have the lavender, the rest is easy:

Combine the sugar and lavender in a sauce pot and add the water. Bring to a boil over medium heat While stirring until sugar is dissolved. Simmer for five minutes and remove from heat. Allow lavender to steep like tea until completely cool. Strain out lavender and pour syrup into a clean bottle. Use within a couple of weeks. 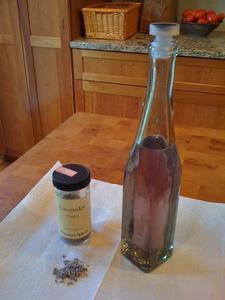 We usually have a bottle of 190-proof grain alcohol (Everclear from Wisconsin) in the cabinet that I use to make liqueurs. We sometimes add one or two tablespoons to any syrups we make in order to help preserve them. You can use vodka for this as well, or just use it up within a couple of weeks.

Rimming the glass
We find that despite the great flavor of my syrup, we want a touch more of the lavender in the cocktail than the recipe above allows. We could add more of the syrup, but that would drown the sour lemon in sweet and you want to avoid that. Our solution is to rim the glass with sugar using lavender syrup as an adhesive. This will put a touch of lavender right on your tounge. Take a Q-tip and dip it in the syrup. Hold your cocktail glass upside-down against the cotton swab and spin the glass by the stem. This will coat a thin line of syrup around the outside of the rim like a pinstripe. Then, before the syrup dries, spoon sugar down the side of the glass so as it runs over the edge. It will stick along the pinstripe. At this point, you can put your rimmed glass into the freezer to chill. This technique keeps the sugar on the outside only, and every sip gives you a definite taste of lavender.

Overall, the drink remains tart and refreshing—like good lemonade. The lavender is somewhat subtle. It’s obvious and present, but not overpowering like a perfume. Coupled with the sugar, we are surprised how much we enjoy lavender in a drink. It makes a plain old Lemon Drop seem common and uninteresting, and we’ll definitely find other uses for the syrup. 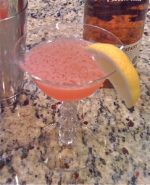 This is a great recipe and a lovely cocktail! We love all things floral in cocktails :-)