Our first day on the Kentucky Bourbon Trail® started with a drive through Bardstown which is south of Louisville. Although we’d spend the evening in Bardstown, we drove straight on to Loretto for a tour of the Maker’s Mark Distillery. Along the way we passed Jim Beam and Heaven Hill. We had heard good things about the Maker’s Mark tour, and since it was somewhat off the beaten path, we decided it might work best to start there and make our way back to Bardstown in the afternoon.

Our arrival was timed perfectly and we started a tour of the grounds, crossing Whiskey Creek to visit each building in turn. Along the creek stands one of the oldest liquor sales buildings called the Quart House where customers used to come and fill up their quart jugs. Those days are gone, but the old building remains. The entire “village” of black buildings is surprisingly beautiful, each with red shutters and bottle-shaped cutouts. Every building has a purpose and is sized accordingly.

From yellow corn to White Dog
As we approached the tall Still House, the air became filled with the aromas of sweet grain. The Still House is perhaps the most interesting building on-site because it combines so many steps in the process of production under one roof. The highest roof covers the 38-foot column stills, but that’s not where production actually begins.

It starts with a 10-acre spring-fed lake on the property. Although it was not immediately visible, Maker’s Mark draws all of it’s water from this single source. The geology in the area makes this the perfect location to create whiskey. Limestone acts like a filter for the water, removing impurities such as iron which would darken the whiskey and destroy its delicate flavor. The second natural ingredient is the grain. By law, bourbon mash must contain at least 51% corn. Maker’s Mark uses 70% corn, 16% red winter wheat and 14% malted barley. This enters the Still House through a roller mill which gently crushes the grain before it is put into mash tubs.

Water is pumped into the tubs with the grain and it is cooked for several hours to create a sweet mash. This is then moved to fermentation vats in the next room. Some of them are are century-old cypress vats that have been used continuously. Yeast is added and the grain ferments for several days. The fermentation process is incredibly active. As the yeast consumes all of the sugar in the mash, it creates alcohol as a by-product, and in a vessel this large, the surface resembles a rolling boil. Although fermentation does produce noticeable heat output, the steady bubbling effect is merely the release of massive amounts of carbon dioxide gas.

The tour guide encouraged everyone to dip their finger into the fermenting mash and taste it’s progress. Depending on the vat you sample and the time it has been fermenting, you can taste a sweet, flat or slightly sour “beer”. That’s really what is being created here—beer—as any homebrewer can confirm. There’s no hops, of course, but the fermentation is basically the same. When all of the fermentable sugar is consumed, the resulting whiskey beer comes in at around 9-10% alcohol. It’s finally ready for distillation.

We returned to the tall column stills and observed the clear “bourbon eligible distillate” pouring out. Distillation is a simple process by which the beer is heated within a column to the point of evaporation. The alcohol evaporates and travels to the top of the column where condensers cool it and collect the alchol. From there, it is fed into a second still where the process is repeated, improving the purity of the alcohol. The final product is called “White Dog” which is basically a high-proof moonshine, or white-lightning spirit. If the corn, wheat and barley is freshly ground and transferred quickly into the fermentation stage after being cooked, this final distillate will retain a lot of character from the original grain used. We sampled the White Dog, and we can tell you that it tastes and smells like buttered popcorn! It was amazing to see the entire process from grain to distillation happening in one building. 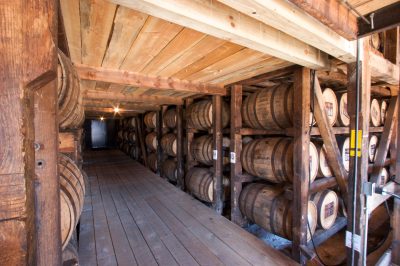 It’s all about the barrels
Although the distillation process marked the final stage of whiskey production for the early pioneers, the delicious product we know as bourbon today is only just getting started. It may seem like the real work is finished, but it’s the aging process in oak barrels that contributes all of the complex flavors and color.

By law, bourbon must be aged no less than 2 years in new, charred white oak barrels. First, the oak is toasted. This coaxes the sugars out of the wood so that the oak flavors can be absorbed by the distillate. Then, the inside of each barrel is set on fire for only a few seconds. The charring gives the distillate it’s color and contributes even more flavor and complexity. Most bourbons, if not all of them, exceed the legal requirements regarding aging. Maker’s Mark, we learned, spends more than six years in the barrel. While in contact with oak, the whiskey is stored in warehouses that are not insulated and are allowed to experience seasonal changes. During the hot summer, barrels near the top of the warehouse endure higher temperatures than those at the bottom. The bourbon expands into the wood where it mingles with the toasted oak. In cooler months, the whiskey relaxes, drawing the oak flavors into solution. Such inconsistency and environmental change requires that the barrels are periodically rotated from top to bottom. Each barrel spends at least two years at the top of the warehouse. 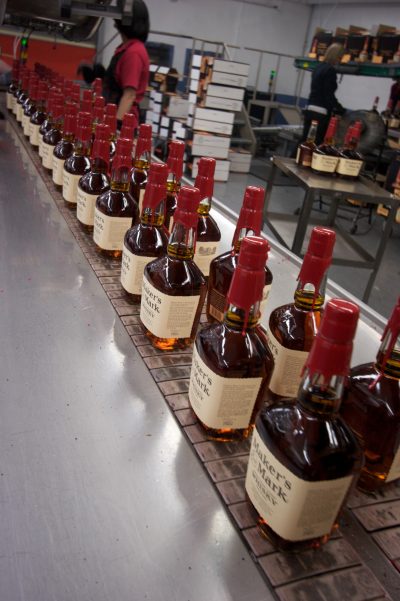 Bottling
A panel of tasters that include employees help judge a barrel’s quality and decide when a barrel is ready to be “dumped” into a collection vessel ready for bottling. Barrels are collected and combined in order to achieve a flavor consistent with the brand. The bourbon is pumped into the familar square bottles and a traditional label is affixed. The labels are printed on-site using an antique printing press. Finally, each bottle is hand-dipped in wax to seal the cap.

The wax-dipping is a Maker’s Mark trademark. Dipping the neck into wax was an idea borrowed by the founders from cognac which is sometimes sealed in a similar fashion. Bottling line workers take turns in 30-minute shifts hand dipping the necks into hot wax. A typical worker can dip approximately 23 bottles per minute. Apparently, about one out of fifty bottles is “slam dunked”. This results in the bottle being half covered in wax. Such bottles often become collector’s items. Although we were not familiar with the slam dunked bottles and don’t recall seeing them on the shelf at the liquor store, we happened to observe one of the bottling workers performing this special technique right when we snapped a picture!

Conclusions
At the end of the tour we sampled the final product and compared it to the White Dog (bourbon eligible distillate). After seeing the entire production process it was nice to finally taste the results. Between the quaint grounds of the distillery and the entertaining tour on such a gorgeous afternoon, we had a memorable day. We loved seeing each building and meeting the friendly staff. Everyone was hard at work with smiles on their faces. Questions were met with friendly and informative answers. We were encouraged to take photographs and nobody worried much about where you stepped or what you touched. We were surprised at how clean it was everywhere we went and how laid-back the entire process appeared. It’s a serious business, making quality bourbon, and marketing plays a big role in the entire equation. However, the product needs to stand on it’s own if it is to fulfill the promises of its brand. Did we buy any bourbon at the gift shop? Of course we did!

Kentucky Bourbon Trail® is a registered trademark of the Kentucky Distillers’ Association.

Fantastic blog! Do you have any suggestions for aspiring writers? I’m planning to start my own website soon but I’m a little lost on everything. Would you advise starting with a free platform like WordPress or go for a paid option? There are so many options out there that I’m completely overwhelmed .. Any suggestions? Thanks a lot!

My advice is to start writing. Your website is nothing until it has content, and as that grows, you will develop a writing style that will help define the tone of your site. I try to keep things pretty informal here, so I am often writing in the first person. Good luck!