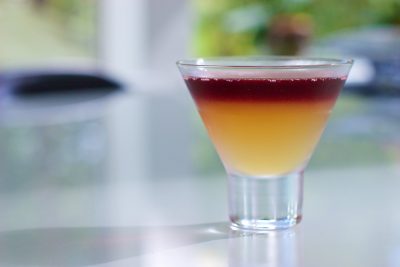 It’s hard not to love the Whiskey Sour with all of its many variations. Even if you don’t think of yourself as a whiskey drinker you can usually find something you like in this category. You can go for the classic preparation with egg white, something a bit more modern like a Rattlesnake variant, a wonderful Whiskey Smash, or even the best Amaretto Sour in the world! But with everyone’s favorite Irish holiday just around the corner, we decided to explore a little history and see if we could find a version that would be appropriate for March. The Gangs of New York cocktail by Sandy Levine of The Oakland Art Novelty Company in Ferndale, Michigan is the perfect solution.

The Oakland is an elegant speakeasy in the Detroit area often considered the best cocktail spot in the city. So, why then, is this whiskey sour variant called Gangs of New York instead of, maybe, Gangs of Detroit? We believe there are several good reasons why this is the right name for this drink, and why it’s the drink we want to make on St. Patrick’s Day.

Shake everything but the wine and strain into chilled cocktail glass. Float the wine.

Let’s start with the base spirit. You should notice right away that this isn’t a typical whiskey sour because it uses Irish whiskey. Traditionally, whiskey sours contain American rye or bourbon. That’s fine, but this cocktail proves that there is no good reason you can’t use Irish. Levine calls for Teeling Single Grain, an award-winning expression from the first new distillery in Dublin in 125 years. This Spirit of Dublin is noted for its spice and fruit aromas, and a flavor and color that comes from the California wine barrels in which it is aged. That’s right—this whiskey is the result of wine barrel aging which ties directly into the most unusual feature of this whiskey sour recipe: a red wine float. 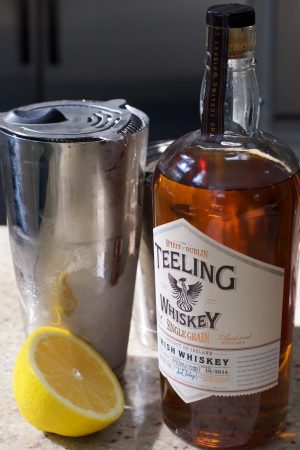 But the red wine float isn’t actually a new idea. It has a long (but forgotten) history, and it is a technique we have been meaning to try ever since we read about it in David Wondrich’s wonderful book. According to his research, sometime around 1883 a bartender in Chicago started topping whiskey sours with red wine. The “claret snap” (at the time, any red wine was called claret) added a bit of whimsy and color to the drink. A few dashes of wine may only transform the look, but a little more poured over the back of a bar spoon does indeed contribute some flavor too. It apparently caught on as others started doing the same thing. They would call their sours by different names until the 1900’s, says Wondrich, when it was widely referred to as the “New York Sour”.

So, here we have an Irish whiskey sour that employs the claret float. A half-ounce will affect every sip until its gone. Levine suggests using a bold red wine like a barolo, but we decided to use a Columbia Valley cabernet. This tie-in with the wine barrel Teeling Single Grain is a nice touch! As we learned from David Wondrich, the historic name for a claret-topped sour is the New York Sour, and since we are using Irish whiskey, calling it Gangs of New York now makes a lot of sense. It’s certainly better than calling it the Dead Rabbit cocktail. If you haven’t seen the Scorsese movie, Gangs of New York is about an Irish American gang in New York City during the 1850s called the Dead Rabbits.

We like the name of this drink, but we love the drink itself!

I’m believe the name references the Martin Scorsese film, “The Gangs of New York.” Starring Daniel Day Lewis, the film is about the Irish immigrant gangs of 19th century New York. Thus the title is very apt and timely.

Yep. Just as I described.