If ever you find yourself thumbing through the pages of old cocktail books, you will inevitably make your way past several entries involving sherry. They are easy to ignore as you search for something that sounds more exciting—maybe a cocktail based on whiskey or gin. After all, when was the last time you actually heard someone ordering a glass of sherry? Furthermore, have you ever seen a sherry cocktail on any bar menu in your entire life? That is changing, while most of us can probably remember watching Julia Child using sherry occasionally in her recipes on TV (or was it Dan Aykroyd on SNL?), but for us, sherry has always seemed better suited for the kitchen cabinet than the classic cocktail bar. How wrong we have been.

Having ignored it for far too long, we decided it was finally time to challenge our opinion about sherry and to use it as the base spirit in a classic cocktail. The Sherry Cobbler is such a simple drink to make, we can’t believe it has taken ud this long to try it. Back in its day, it was the most popular drink around. The late 1800s also saw the appearance of the modern drinking straw, a novelty that allowed patrons to draw the delicious elixer right through the ice and fruit that filled their glasses (and past their cold-sensitive bad teeth). So, if it really was innovative and delicious, what ever happened to the Sherry Cobbler? Why isn’t it enjoying this same popularity today? 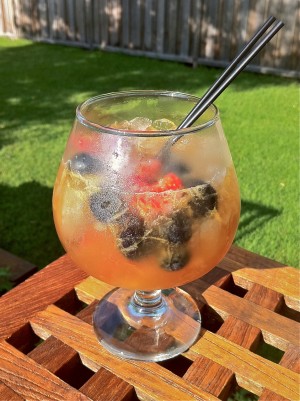 Take a slice of orange about 1/8th of an inch thick, cut it in half and drop it into a shaker. Add the half tablespoon of finely granulated sugar. Muddle the orange to extract the juice. Add the sherry, ice cubes and shake to chill. Pour the whole works into a tall glass and garnish with raspberries, pineapple, strawberries or any fruit in season. Serve with a straw.

Sherry has long been prized as a wine treasure. Starting life as a white wine, it is placed into American oak barrels leaving “two fists” of air space to accommodate the flor, a layer of yeast that forms on the wine’s surface. The flor is responsible for the complex flavors found in sherry and protects the wine from becoming oxidized. This delicate aging and fermentation process can lead to several different styles including drier Fino varieties or the darker Olorosos. The resulting wine is fortified with brandy and depending on the style, it may also be sweetened.

With all of the care and attention that goes into making a good sherry, it is still largely neglected in the US today, probably because of Prohibition. In those days, If you were going to spend good money on alcohol, chances are you wanted something worth your while. Whiskey and gin became the priority and poor old sherry was ignored. Many current wine enthusiasts regard it as still underappreciated, and a decent bottle of sherry represents one of the great wine values available today.

Before making a Cobbler, we weren’t totally blind to sherry in cocktails. We had used it to top off the Fog Cutter, and a little is required in the excellent Trident cocktail, but it wasn’t until Johnny Michaels had us hunting down some Oloroso Sherry to simulate half of the salty caramel flavor in his incredible Night of the Hunter that we began to recognize its full potential. Depending on the style of sherry you use, whether it’s a lighter, dry Fino or a more adventurous (and possibly more expensive) Amontillado, you may need to adjust the sugar. We tried it with Oloroso and had good results.

This cocktail is fantastic on a hot summer day with the “cobbles” of ice keeping everything cool and the fruit garnish giving you something to nibble while you sip. It’s typically served in a tall bar glass, but we put ours into a bulbous snifter. This drink also works nicely with other base spirits. A Whiskey Cobbler can be just as refreshing, but we challenge you to try it with sherry. There are prized bottles that fetch very high prices, but you can usually find great values too. Just make sure to refrigerate it once it’s open (like vermouth, it’s a wine product after all), and don’t try this with that old bottle you might have in the back of your kitchen cabinet!

Weird — I was just on you site, and I completely missed this post. Every time I’ve made one of these for someone, it takes exactly 4 sips for them to think it’s the greatest drink in the world. They don’t always like the first sip (a little stronger than they were expecting), the second sip is “maybe I was wrong about the first one”, then “this really isn’t half bad”, an finally “wow!”.

Hi Randy ! I just saw a drink called The East Indiaman, which called for East Indian Solera Sherry ( a sweet kind of sherry I think ), paired with rye, cinnamon syrup and lemon juice. In the article it said that the sherry has a shelf life of only a couple of weeks once opened, and needs to be refrigerated. It feels kind of a waste to buy a bottle of sherry for 25 dollars, and having to finish it pretty fast. Isn’t the sherry being so sweet more durable, or what do you think ?

It’s a bummer about the shelf life. Use it with friends who will have a little after dinner or something. Or mix up some cobblers. You could also just open it and see what happens over time. Maybe use a vaccu vin device to suck out much of the air like a bottle of wine. I’ve kept sherry around a lot longer, but I am sure the flavor degrades. It becomes a choice of how much you can accept as the flavor changes. Same goes for vermouth, although at least it’s cheaper than sherry.

in the midst of corona virus quarantine with limited trips to the grocery and no access to a liquor store. Reading a book, out of wine, don’t want beer and holding off on a cocktail till later. let’s see….no oranges…..ok…….4 oz of fino sherry, a dash of orange bitters and about 1/2 oz or so of Pierre Ferrand curacao, lots of ice and some frozen blueberries. not bad in a pinch!

Clay, good plan on subbing for flavor alignment. I do like the PF dry curaçao—use it in Mai Tais. Might be just the right amount of sweetness missing from the orange slices. Sorry to hear you are in such tough shape—no wine even? I think it will take us a while to deplete the cabinet inventory, but even if that happened we have enough wine in the cellar to last years!