A good friend of ours has been reading a collection of short stories by PG Wodehouse about a character named Bertie Wooster and his valet, Jeeves. He came across a passage in the 1924 classic “The Rummy Affair of Old Biffy” in which Bertie recounts his experience at an exhibition at Wembley in North London. There, he is drawn to a Planter’s bar where a man is mixing an unusual West Indian cocktail. Without going into specific detail, he simply states that the drink contains seven ingredients:

“A planter, apparently, does not consider he has had a drink unless it contains at least seven ingredients, and I’m not saying, mind you, that he isn’t right. The man behind the bar told us the things were called Green Swizzles; and, if ever I marry and have a son, Green Swizzle Wooster is the name that will go down in the register.”

The exhibition at Wembley was probably very similar to the Minnesota State Fair, but while Bertie gets Green Swizzles in the 1920s, the best we have today is probably that guy making fudge at the Grandstand. Still, can’t we make our own Green Swizzles?

We’re not the first to consider the idea, but to pull it off, you need a swizzle stick and something in the recipe to make it green. We have the swizzle stick covered in the last post (and we gave one away). For the color, there are a few possibilities. Midori quickly comes to mind, but that didn’t exist until 1978, and we’d rather be faithful to the story, even if the drink is pure fiction.

Crème de menthe is another possibility, and it’s the one David Wondrich chose when he was searching for a solution. Mr. Wondrich was, after all, able to track down a 1930 photograph of a man drinking a Green Swizzle in Trinidad to prove that the drink did indeed exist. And yet, we think he could have considered another green spirit instead of créme de menthe. 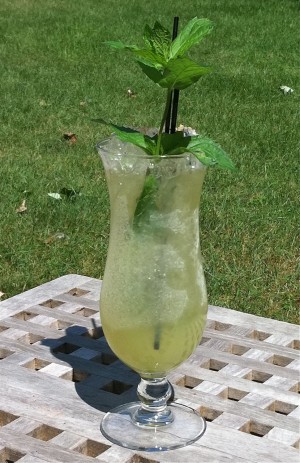 Swizzle with crushed ice until frost appears on the glass. Add more crushed ice and garnish with mint sprigs and freshly grated nutmeg.

Marco Dionysos of Clock Bar in San Francisco invented this cocktail in 2003, but Green Chartreuse has been around since 1764. We like to believe that Bertie Wooster’s Green Swizzle was our Chartreuse Swizzle—a drink that is compounded using West Indian flavors and fruit, old world spirits and the swizzle technique to mesmerizing effect.

Of course, this swizzle doesn’t have seven ingredients! No problem. Just add a little rum and a few dashes of Angostura Bitters. If you count the mint, you’re there. We also recommend using your own falernum. It’s easy to make, it only takes a few minutes of work and it will be ready the next day.

Free Swizzle Stick!
We’d really like to know what you think. Did you make some falernum? Are you going to? Is there a version of this drink you want to share? Have you had another type of swizzle before? Was it green? Anyone who leaves a comment below over the next week will qualify for a drawing (prize has been awarded). Next week, we’ll put all the names in a hat and pick a lucky winner. We will then contact you for an address and send out this hand-crafted swizzle stick! Everyone else will have to make their own or swizzle with their bar spoon.

In Bertie Wooster’s 1920s slang, ‘rummy’ means ‘odd’ or ‘peculiar’, and Bertie uses the word countless times throughout his stories. But perhaps Wodehouse intended a double entendre of literal and figurative meanings of ‘rummy’ in ‘The Rummy Affair of Old Biffy’ — which included a vital role for this drink. Thanks for sleuthing out the recipe! Going to have to try one of these …

I have been reading and trying your mixology explorations for awhile now. I could spend all day researching and embracing, not only your recipes, but foods that complement them. (unless, of course, it is a cocktail that needs to be consumed on its own). Thanks for the great information on the swizzle stick the Falernum, and all of you other Mixologistic Magic.

Frederic, I tried the Delores Park after reading your description. I think a better Amontillado would have made the drink, as I kept rounding back to the flavors of the less expensive sherry I used. I need to try the Queen’s Park next I suppose. Luke, thanks for sharing the story. It was fun to find out that others have also pondered the Rummy Affair. Kathy, good luck on your falernum. It’s one of the easier projects. I only wish more recipes called for it. By the way, looks like one of you will be getting a swizzle stick if… Read more »

butters, you are bumping up the alcohol with the rum–part of my plan to reach 7 ingredients. You also upped the ante with pineapple syrup. What about the Angostura? Keep it or leave it? Either way, Bertie Wooster would probably approve.

honestly I think the idea of the angostura is awesome, but I felt it got lost. I would love to see this drink with a bitter edge, but don’t know how much chartreuse I am willing to experiment with as this is a fantastic drink to begin with. It could be really fun to see how much bitters you could use and I think next time I am gonna try Fee Bros old fashioned. I discovered the banks and chartreuse match as a result of subbing in banks for gin in a last word variation. banks is really awesome stuff!… Read more »

butters, perhaps the Ango getting lost is the whole point in adding it. Rather than rising to prominence, it acts as a “seasoning” to bring the other ingredients together like it does in a Manhattan. Certainly, cocktail bitters added in dashes to any recipe won’t actually make the drink bitter.

Sounds like I need to track down some Banks. The problem I have with expanding my rum selection is that it disappears too fast!

very true about the bitters acting as a seasoning. As a cook in a restaurant I sometimes think too much about certain ingredients in my cocktails. Banks is something you want!

Ok, the official drawing went like this: First, I cut up half of an old version of my house cocktail menu into little squares of paper. I then put each name of everyone who commented here on a square that I folded and placed into a hat. I then shook the hat to mix them up and had my wife pull one out. And the winner is. . . BUTTERS! Thanks everyone for posting comments. Butters, I will contact you via email, or please use the contact form here to send me a message with your mailing address so I… Read more »

Made one of these yesterday and what an utterly refreshing drink. It carries some heavy earthy notes, but simultaneously dances like mysterious northern lights on your tongue. The crushed ice fools you to believe that it will last a while longer, but all of a sudden you’ve imbibed it all. The aftertaste is prominent though and lingers for a good while. It’s simply a marvelous mix and it’s fantastic that you have brought this cocktail to our attention Randy, so in can be passed down to younger generations. It’s an heirloom which need to be preserved. The swizzeling went fine… Read more »

Paul, welcome to the Chartreuse Swizzle experience! Mine are rarely green, however, since I almost always drop some Lemon Hart 151 in there.

Regarding the frost, the thermal capacity of glass is much different than say, a silver julep cup which would frost up right away. Thickness is a factor, but so is the humidity of the room. It’s condensation that turns to frost, so in a dry environment this effect will be less pronounced. Still, what’s important is on the inside of the glass, and you have certainly been enjoying that part without the frost!

Unfortunately, this drink is a good way to burn through a bunch of expensive Chartreuse. I love these, but I hate to see my green elixir disappear. And yet, if not this drink, it will end up in something else. The best things in life are seldom free!